The  current  ongoing  European  Union  elections  are  revealing  to  us  the  inner  workings; inside  political  dealings  and  concessions  between  the  rich  members  of  the  EU  and  it's  poor  one's,  between : Southern  Europe & Northern  Europe; between  Old Europe &  the New Europe  and also between  Eurozone  &  non-Eurozone countries !  The very outcome  of  the 2014  EU elections  depends on a delicate balance pitting  right against left,  north  against south,  east versus west, and more than ever, men against women in a quest for the posts that  will  determine the EU's future for the next five years.  Students of Bible Prophecy  know  that  in the end  this same  group  of  people  will   produce  the  final  10  King's  guaranteed  by  the  Book  of  Revelation. As of  July 15, 2014  it is impossible to tell  exactly  who the final 10 will end up being. 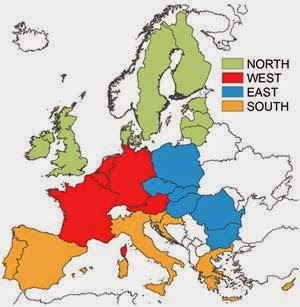 Posted by revelationwatcher at 2:58 PM