CHINA : THE KING'S OF THE EAST IN AFRICA 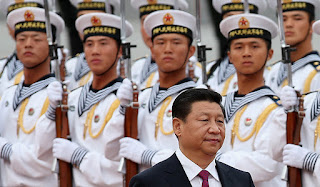 The  King's  of  the  East  are  on  the  move,  China  is  building  its  first  military  base  in  Africa  in the country of  Djibouti  and  is  now  following  in the footsteps and copying the U.S. military in building  military bases way beyond its' national borders.  If  you didn't  know, this student of Bible Prophecy  has been  teaching for many years now that according to the Prophecies of the Book of Revelation; 'The King's of the East'  led by China will be  one of the largest military players during the endtimes  !!!  Teachers and students of Bible Prophecy for decades  have been   wondering  how that  it would be logistically possible to move   200  million soldiers; as we are nearing the beginning of the Tribulation period it is now getting clearer and clearer  as  to  one of  the  ways  of  how  the 'King's of the East'  will  get to  the  Valley  of Harmageddon  !!!  Beijing for its part  has  refrained from  calling  this new  military installation in the African  Continent  a 'military base' but instead  opted to  describe it as an installation that  would serve to resupply  Chinese Naval Ships that would be participating in United Nations  anti-piracy missions.  If  you  didn't  know  China  years  ago  initiated  massive  investments  in  many  African  countries, as American  and other Western  investors fled  the  African  markets  China  saw  an  opportunity  and  stepped  in  and  has  thus  far  invested  billions  in  oil  producing countries of this African continent  !!!  By  creating this new  military-naval base in the Horn of Africa; the  King's of the East  unknowingly  are  positioning  themselves  for the  future  Battle  of  Armageddon  !!!

There  are  a little over one million Chinese  citizens living in the African continent  and  there  are  an  estimated  800  Chinese  Corporations  also in Africa  !!!  The  Chinese  perceive  Africa  as  one of the largest  almost  never-ending  source  of  raw  natural  resources  still  untapped  on  planet  Earth  and  you  better  believe  that  they  are  going to exploit   as  much  of  it  as  they  can.  Chinese  Corporations  are  famously  known  to  poison  their  own  rivers  in China  by dumping  huge  amounts  of toxic  chemicals  from  their factories, so  guess  how  much they  are  going to  care  about  Africa's  ?

If  you  didn't  know,  the  Chinese  Navy  has  been  flexing its  muscles   all over the South China  Sea  and  you  better  believe  that  its  neighboring  Asian  countries  such  as : Vietnam, Japan and others   don't like it 'one bit' and are requesting the presence of U.S. Naval Forces  in the region.  According to various sources  the  annual  Chinese  military  budget is some $ 145  Billion  a  year  but  according to   military  experts  in the know  the  figure  is  much, much  higher.  For  its  part  Beijing  defends  its  military  presence  abroad  by  pointing the finger at America,  the  U.S.  has for decades  used its  military  abroad  to  protect  its  commercial  interests  and  according to  Chinese Communist officials;  China  is  just  doing the same  in Africa  and in the South China  Sea, using its  Naval  Forces  to  protect  its  commercial  interests.  The  U.S. military  as well as the French  military  also  have  a  base  in  Djibouti  which  President Obama  recently  renewed its lease for another  20 years. Things are sure getting very, very  interesting  !!!

China  is  "NOT"  yet  ready  for  Armageddon,  Beijing  has  been  quietly  purging  its  military ranks  all  this  decade, the present leader of China Mr. Xi   launched  an intense  anti-corruption campaign  that  has  brought down  several  PLA  Generals as well as several  senior  military officials.  It  is  important to note  that this  'Student of Bible Prophecy'  is  not  trying to demonize China's  presence  in  the  African  Continent; the truth of the matter  is that   most of the major world powers have long been  exploiting the  natural resources of Africa for their economic gain  !!!

China  has  been  investing billions of  dollars  in  much  needed  infrastructure  in  various  African  countries  while  at  the  same  time  getting in  'bed'  with  very  questionable  African dictators  who  dominate   much of the  African Oil;   Beijing  is in China  because it needs  'Oil, oil and more oil'  and  it  doesn't  want  to  become  totally  dependent  on the  'Middle East Oil'  should the worst  scenario ever  happen ( war in the Middle East ).  Like  any  international  investor, China knows of the great risks  in  investing  in  African  countries  who  are  very  politically  unstable "BUT"  Beijing is no  dummy  either,  it  has  sent  thousands  of  Chinese  soldiers  to secure  their  heavy  investments  there  especially  along the new  Oil  Pipelines  !!!

According to the Book of Revelation,  the King's  of  the  East  will   march  towards  the  Middle  East   for the Battle  of  Armageddon  with  200  million  soldiers, for many years  many  'military  experts'   questioned  the  possibility  of  such  numbers, China's male population, China's  industrial prowess  and  now  its  military  presence  way  outside of its national  borders   should  be  enough  evidence  that  the  eye  opening  Prophecies  of  the Book  of  Revelation   are  not  only  true;  but  the  evidence  is  growing  that  we  are  quickly approaching  the  final  7  years  of  the  Tribulation  Period;  'The Final Week of Daniel.'

In  other  'eye  opening'  news  it  is  being  reported  that  in  Madaya, Syria  the  3rd Horsemen  of  the  Apocalypse  has  prematurely  visited  the  small  town,  even  cats  and dog's did  not  escape  from  being  eaten  by  their  starving  human  owners  !!!  Forces aligned  with Syria's  dictator   Al-Assad  managed  to  cut  off   the food  supply  of the town for several months, residents were reduced to eating grass  and  insects  and  then  they started eating their pets !!!  What  happened  in  Madaya, Syria  according  to  the  Book of Revelation  is guaranteed  to  happen  on  a  much, much  larger  scale  during  the  Tribulation period  as  the 4  Horsemen of the Apocalypse   gallop  through  a  world  that  will be  torn  and turned 'upside down' with one war  after  another  !!!

Don't  believe   all  the  hype  you  hear  about  China  !!!  China   although  is  becoming  one of the world's  largest  economies,  they  also  have  some  of  the  world's  largest  problems; examples of these include : Chinese cities are some of the most polluted in the world because of lax or non-existent  industrial  &  environmental  laws; Chinese factories  are not just massively polluting  China's air  but  also  many  of  its  rivers, it is no secret  that  many   Chinese  rivers are  full  of  toxic waste  and  all  of  these  chemical  wastes  are in the process  guaranteeing the that the  next generation of Chinese  children will  be  born with many :  birth defects, cancers, asthma  and all types of  new  illnesses  !!!  The  Chinese  Communist  Leadership  has their 'hands  full'  and according  to  Bible  Prophecy  the  last  Empire  that  will  dominate most  of the  world  will "NOT"  be  Asian  "BUT"  a  future  Western  alliance  of  10  King's according to  the  Book of  Revelation  !!!  China  is  not  just  persecuting  Christians  but  also Muslims and  anyone  who  may  pose  a  threat  to  its  atheistic  secular  government.  China  is  a prime example  of  the  'Dark  Side'  of  atheism, most if not all  atheists  blame  religion  for  many  of societies  ills  yet  when  they   are  in  power  they  too  are  no  better  than  anyone  else  !!!

Additionally, China's   'one child  policy'   ( they have now  changed it to a two child policy*) has  created  an  enormous  present  and  future social  problem  that  will  explode  in  the  face of  the  Communist  Party  in  the  future, China   will  have  over a hundred  million  males that cannot marry,  because  there's  not  enough Chinese  females;  it  is  no  secret  that  for decades many Chinese  families  practiced 'Female  Infanticide'  because  many Chinese families wanted  to produce  a  male  so  that they  could  carry  the  family  name  onwards; the CCP  messed  with the  established  order  that  GOD  established  in  nature  and  they  are sitting  on  a  great  'social  time  bomb'  that  will  explode  and  come  back  to  haunt  them  !!!