THE RISE OF THE FINAL ANTIOCHUS EPIPHANES 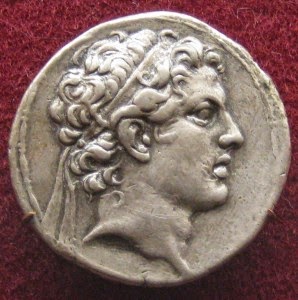 As  a  student  of  Political  Science  this  student  of  Bible  Prophecy  has  observed  that  there  really isn't nothing  'NEW'  to  when it  comes  to  an  individuals  rise  to  power  in the 'vicious and cutthroat' world of politics. Antiochus IV  Epiphanes  was  what  we  call  a  forerunner  of  the  endtimes  'Little Horn.' Antiochus  politically speaking  was  an  ambitious  man  who  eleminated  those in his way.  The path to the throne  did  not  come  easily to Antiochus;   he  knew what  he  wanted  early  on  in  life  & pursued  his political ambitions at all  costs. Antiochus  exploited  the Jews  by  his  tactic  of  'divide  &  conquer'  he sided with the Hellenized  Jews  and  slaughtered  many observant Jews who 'REFUSED'  to  worship Zeus  and it  is  he who  caused  the  'Abomination of Desolation'  that  will  be  repeated  according  to Bible prophecy by the  endtimes 'Little  Horn.'  The endtimes  'Little Horn'  rise to power  will  also  be  full of intrigue, deception, flatteries & 'mysterious deaths' of  his enemies; for that which was shall be ! Just like the rise of  Antiochus Epiphanes  was  'NO' accident;  the rise of the final  'Little Horn' will be in a  likewise  manner.  Even  Hitler  and  Stalin  'used, abused & exploited'  the  political  system  of  their day  for their  political  benefit. The rise of  these  'EVIL'  men didn't  happen  in  a  vacuum or  by  mere  chance. Somewhere  in  the  EU  is  a man  who's  working himself  up on the political  ladder  and  who  is going to be at the right  place and at the right time  when  Satan  comes  offering him 'the world'  for  his  soul. Antiochus  rise to power  wasn't overnight, Hitler  was jailed  & there wrote Mein Kampf; and   Stalin was  General Secretary of the Communist Party  before  he  gained  'INFAMY.'
Posted by revelationwatcher at 11:24 AM