THE FUTURE OF EARTH ACCORDING TO REVELATION 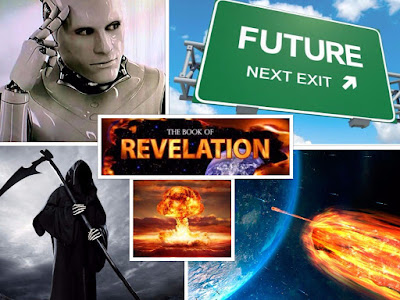 Woe to the inhabiters of the earth and of the sea! for the devil is come down unto you, having great wrath, because he knoweth that he hath but a short time.   - Book  of  Revelation  12 : 12

According to  some of the top  political  scientists;  'Authoritarianism'  will make a comeback As threats to national security increase, and as these threats expand in severity, governments will find it necessary to enact draconian measures.  International  Islamic  Terrorism  is  already  making  this  a  reality  in  most  Western  countries   !!!  Over time, many of the freedoms and civil liberties we currently take for granted, such as the freedom of assembly, the right to privacy (more on this next - it’s worse than you think), or the right to travel both within and beyond the borders of our home country, could be drastically diminished. At the same time, a fearful population will be more tempted and willing to elect a hardline government that promises to throw the hammer down on perceived threats - even overtly undemocratic regimes.

The threats to national security will have to be severe to instigate these changes, but history has precedents. Following the September 11 attacks and the subsequent mailings of anthrax spores, the US government enacted the Homeland Security Act. This legislation was criticized for being too severe and reactionary, but it’s a perfect example of what happens when a nation feels under threat. Now imagine what would happen if another 9/11-type event happened, but one involving hundreds of thousands of deaths, or even millions.

According to Bill Gates by the year 2035   ‘poor countries’  will no longer exist due to rising levels of international aid !!!   Bill Gates also predicts that by 2030 Africa’s agricultural productivity will increase by 50%.   Making the continent that presently imports $50 billion agriculturally self sufficient  even   though  presently  some  70%  of  Africans are farmers.  Mr.Gates  is   absolutely  'off  and  wrong'  on  this  one,  according  to  our  Lord  Jesus  'The  Poor  will always  be  here'  because   human  greed  and  selfishness   is  something  that  not  even : global  welfare, international  aid  nor  international  investments  can  fully  squash  out  and  obliterate   !!!   The  biggest  enemy  of  the  African  continent  ( and the same is true  of South America, Asia  and  mostly  everywhere  but  on  different  degrees   )   is   CORRUPTION   !!!  Several  wars  in  Africa  have  demonstrated  that   corrupt  local  African  governments  receive  international  aid  'BUT'  do  not   always  distribute  it  to  their  most  needy  citizens.  When  the  UN  and  the  U.S.  were  dropping   crates  full  of  food  from  the  safety  of  the  air;  numerous  African  militias  and  warlords   would  secure  the  area  to  steal  and  keep  all  of  it  for  themselves  to  later  sell  to  their  fellow   African  starving  brothers  and  sisters  !!!

Posted by revelationwatcher at 8:31 AM